* In case of any delay in receiving the OTP, you may verify it later. Please proceed without verification.

Your mobile number is not registered with us. Please register your mobile no.

Over the generations, several wise men and pundits have found peaceful sanctuaries amongst the quiet regions of Chikmagalur. The Southern Dravidan language, Kannada is predominantly spoken in Chikmagalur. The district is stippled with many spiritual places and traditions associated with tales from the great legends like the Ramayana and the Mahabarata. From the olden days, several Agraharas have been refreshing centers of educational and cultural events. 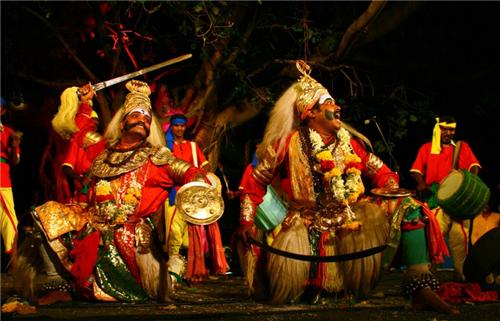 Being one of the most alluring tourist places in Karnataka, Chikmagalur has an extraordinary culture of dances, festivals and fairs. Dollu Kunitha and Veeragase Kunitha are the breathtaking and gutsy folk dances performed in Chikmagalur during Dassera Mahotsava. Furthermore, the Durga Puja and Navratri dances belong to folk and classical genres, and have a blooming presence in different areas of Chikmagalur. Moreover, the district takes pride in the flourishing presence of Bharatanatyam, the Indian classical dance. Besides, one can enjoy the folk drama, Yakshagana in which the actors play the characters from the legends and puranas.

The power of spiritualism can be experienced in Chikmagalur, and most people visit this place to understand the reality of the word religion. In this place, you will find that every religion has equal importance. There are a lot of religious places in Chikmagalur. Several temples, churches, Gurudwaras, and mosques from the olden times are situated in this little charming town. People usually go overboard when it comes to religious views and thoughts.

Kailash Fair is one of the popular fairs celebrated in Chikmagalur in the honor of Lord Shiva. The people in Chikmagalur believe that Lord Shiva appeared here in the form of a stone lingam.

Diwali, a well-known feast of lights, and Ganesh Chaturthi are customarily celebrated in this region. Other than these two important festivals, from April to May (for a period of twelve days) Suggi Habba, Kori Katta, and Bhuta Kola are the festivals regularly celebrated in the rural areas of Chikmagalur. Goddess Parvati and Lord Shiva are the main deities worshiped, and during the feast, some of the dances like Kolata, Bete Kunita, and Alu Kunita are performed.

The first thing to drop into your shopping bag with ease would be coffee followed by cashew and pepper. Nevertheless, you can purchase rattan and lacquerware products which are considered to be the main local crafts in Chikmagalur.

List of some of the art and craft stores

List of some of the dance classes in Chikmagalur