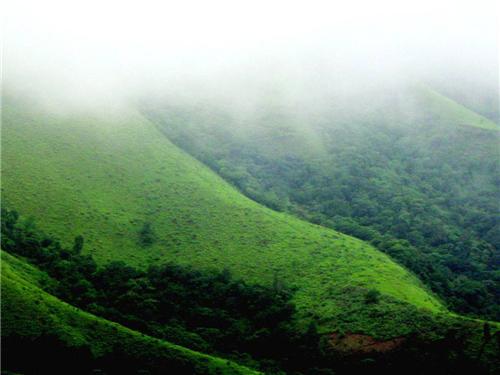 Based in the state of Karnataka, Chikmagalur is known for the perfect weather through out the year. It is at an altitude of 3,400 feet. Chikmagalur is guarded with sky scraping mountains, and 30% of the district is surfaced with thick woods. The 2011 Census has attested a net population size of 1,137,753.

Coming to the land, you will mostly find red loamy and red sandy soil in Chikmagalur. In some parts of the region, hilly area soil, and mixed red and black soil can be seen. This place is the motherland of many rivers, and rivers like Bhadra, Tunga, Hemavathi, Netravati, and Vedavathi run all through the year.

The nerve center of Chikmagalur district, Chikmagalur is 250 kilometers away from Bangalore. It is from 12o 54' 42'' to 13o 53' 53'' towards north latitude and from 75o 04' 46'' to 76o 21' 50'' towards east longitude. From east to west, it's enormous length is around 138.4 kms, and it is around 88.5 kms from north to south. The uppermost point in this region is Mullayanagiri hills at 6318.9 ft. over the sea level. The average record of rainfall in Chikmagalur is 192.5 cms. During the monsoon season starting from June and continuing till August, the temperature differs from 10o Celsius to 23o Celsius. The Summer season starts in March and ends in May and all through the season, the temperature varies from 17o Celsius to 34o Celsius. Additionally, the moderate temperature in winter season ranges from 12o Celsius to 29o Celsius and the duration of winter would start from October and continues till January.

The Bhadra dam is built on the banks of river Bhadra under the river Tungabhadra. Beside irrigation storage, the dam provides power to the immediate villages.

Located in the Kudremukh National Park, the Lakya dam is built over the river Lakya under the river Bhadra. The main purpose of the dam is to gather the deposits and waste materials from the mining industries near Kudremukh.

Explore more about Geography of Chikmagalur