Presently famous as the ‘coffee land’ of India, Chikmagalur in Karnataka was known as Kadur before the nation achieved independence in 1947. Located at the foothills of the Mullayangiri ranges in the south western fringes of Karnataka, Chikmagalur is heavily forested and receives copious rainfall at various times of the year – as a result of which the city and its surroundings have come to be known as a ‘manlad’.

The city sources its name from ‘Chikkamagala Uru’ which, in Kannada, literally means ‘the town belonging to the younger daughter’. Mythical stories generally associated with the city state that the younger daughter of the chief of Sakrepatna – Rukmangada – received it as a part of a royal dowry during her marriage to one of the famous kings in south India. Hiremagalur is a different part of the city, and it is said to have been presented to the elder daughter of the chief in the same form of dowry. 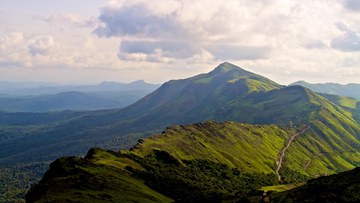 Chikmagalur’s rise to fame and eminence in the present context of the Indian democracy came about mainly as a result of its impressive coffee production numbers over the last few decades. Baba Budan is considered as one of the pioneers of the cultivation of coffee in Chikmagalur – a culture that started way back in the 18th century when he brought first coffee plant from West Asia into this region. In honour of the contributions made by Baba Budan towards the growth and prosperity of Chikmagalur, a certain hill range in the vicinity has been named after him.

The influence of King Janamejaya – yet another legendary ruler who thrived in South India in the middle ages - on the city and its surrounding areas has been preserved by the construction of an ‘Ishwara’ temple, located in Hiremagalur, consisting of a 1 metre high spherical figure of Jdaemuni at the top.